"There were genuinely no signs of Folau’s homophobia at the time. But perhaps we were all naïve."

Israel Folau on the cover of Star Observer's August 2014 issue.

Former editor Elias Jahshan reflects on his time at the Star Observer, when Israel Folau was on the cover, and its representation of people of colour and other minorities.

If I’m honest, I dislike it when people ask me about my favourite Star Observer covers from my time as editor. There are just too many to choose from. There was the cover of our first monthly magazine after retiring the weekly newspaper format, the one with Ian Thorpe for what was his first interview with gay media since coming out, or the time Kylie Minogue tweeted us with a thank you for the cover she was on.

But for the past year or so, one cover keeps attracting attention for all the wrong reasons. The Star Observer’s August 2014 issue featured the then NSW Waratahs stars Adam Ashley-Cooper and Israel Folau.

At the time, I felt it was a rather standard cover in comparison to most other front pages I put out, despite the cheeky “big boys and their balls” headline. But with Folau popping up in the headlines again for his blatant homophobia, that cover has become the most infamous during my two-and-a-half-year tenure as the Star Observer’s editor.

Folau was never my first choice. The cover story wasn’t even about him. That front page was commemorating the return of the Bingham Cup to Sydney, along with Australian Rugby Union’s (ARU) concerted push to tackle homophobia across the code.

The Star Observer was a media partner of the Cup, the “world cup of gay rugby.” Around the same time, all five of Australia’s biggest sporting codes signed the groundbreaking Anti-Homophobia and Inclusion Framework – a commitment to make their sports more LGBTQI-inclusive and friendly.

We had a media opportunity with two high-profile Wallabies players: Ashley-Cooper and Folau.

We initially wanted David Pocock – arguably rugby union’s most visible and vocal straight ally for the LGBTQI community (and all-round dream boat) – but he wasn’t available. He was also playing for the ACT Brumbies, and I remember the Bingham Cup media team being keen on giving us Waratahs players since Sydney was hosting the event.

When writing the cover story, (with a photo taken by the Star Observer’s long-time photographer Ann-Marie Calilhanna) we obtained some quotes from Ashley-Cooper. We couldn’t interview Folau, but we quoted a Bingham Cup spokesman saying he was against all forms of discrimination.

I heard later that Folau had been keen to be part of the photo shoot and had put on a Bingham Cup singlet with enthusiasm. There were genuinely no signs of Folau’s homophobia at the time. But perhaps we were all naïve.

Either way, it all became instantly meaningless when, three years later, Folau publicly stated his opposition to same-sex marriage during the horrid postal plebiscite. He also made another since deleted homophobic Instagram post around April of 2018 about gays going to hell. On neither occasions did the ARU suspend his contract.

It wasn’t until Folau’s third homophobic outburst earlier this year that the ARU terminated it.

I don’t need to delve into why the ARU was right to cut ties with him because he breached their code of conduct. I’m not going to waste time arguing with his supporters who believe the ARU is impeding Folau’s freedom of religion or censoring him when that’s not what’s happening at all. Freedom of speech and religion doesn’t equate to immunity from criticism or accountability.

There’s also not enough space for me to provide a nuanced argument that highlights the underlying racism in some of the backlash Folau has faced, whereby his Tongan background has essentially rendered him more dispensable than say, a high-profile homophobe who is white (writers such as Ruby Hamad and Patrick Thompson – a gay Pasifika himself – have written about this).

Having said that, had I known Folau held these views, I would’ve asked the Bingham Cup to find someone else to be on the cover. The way we couldn’t obtain quotes from Folau directly should’ve been a red flag. But I can honestly say no one saw this coming. The Bingham Cup organisers never hid what they’re all about, so Folau definitely would’ve known what he was signing up for with the photo shoot.

It has come to a point where I feel smug each time this front page keeps coming back to bite him. It makes Folau look hypocritical and opportunistic. Someone who cared more about his ego, rather than his beliefs. And until he genuinely redeems himself, I trust that Star Observer cover will continue to be used to highlight that hypocrisy.

Front pages aside, I can’t begin to say how honoured I felt to have led Australia’s longest-running queer media outlet. The moment I stepped into the editor’s office in November of 2013 I felt the history of Star Observer and its legacy keenly. The power of the past informing the present was omnipresent in everything we did.

When I was told I was the first editor in Star Observer history to come from a non-white, non-English speaking cultural background, it quickly dawned on me that I had a responsibility to use my privilege wisely. I wanted to use my lived experience as someone with Palestinian and Lebanese cultural background – and who also happens to live with hearing loss – to elevate others in the community living in the margins.

Some may argue that would’ve added pressure, and to some extent, maybe it did. But I feel it fuelled my determination to represent our culturally diverse community in a way that hadn’t been done before in Australian queer media.

Some of my proudest stories published include an in-depth feature that tackled racism in the LGBTQI community, and another about the cultural nuances that come with being Indigenous and queer.

We were also the first publication to report on the launch of Black Rainbow in late 2013, long before Courtney Act nominated it as her charity when she competed on Dancing With The Stars.

It wasn’t just culturally diverse people I wanted to represent and humanise in our pages. I strove to publish articles that provided visibility for older queer people and the trans community, and articles that tackled stigma around bisexuality, sex work and HIV.

I also felt it was important to shed light on people not necessarily part of the “the scene” – such as those living in regional areas or the suburbs.

During my editorship, I had the privilege of attending AIDS 2014 when it was held in Melbourne that year and watched from the sidelines as both NSW and Victorian governments passed laws that expunged the historic crimes of gay men convicted before the decriminalisation of homosexuality.

We also helped launch the inaugural Australian LGBTI University Guide, started a nuanced conversation around PrEP, and reported on issues beyond marriage equality – to constantly remind our readers that the fight would still be far from over once we eventually achieve that.

Despite this, one of my favourite covers was when the ACT was the only jurisdiction in Australia that had same-sex marriage – for three days – in late 2013.

It was then that I splashed a front page with “the government didn’t like they but still put a ring on it” headline – my tribute to Beyonce’s Single Ladies.

But to say my tenure as editor wasn’t easy would be an understatement – especially with our shoestring editorial budget. Perhaps the biggest challenge was when we retired the weekly newspaper format in early 2014 to replace it with the monthly magazine it is today. The Star Observer’s then-board of directors had decided on this before I was hired as editor, and I took on the challenge even though a big part of me felt it was crazy.

Having started my career in newspapers, I had no magazine experience – so I felt out of my depth. But I’m so glad I did it – releasing a monthly magazine was not only better for the Star Observer in terms of making it a viable business, it became my pride and joy.

Another challenge was when the Star Observer ran an online crowdfunding campaign to help keep us afloat in 2014. The way the community rallied together to show support for the publication was inspiring and made me relish my job even more, with the likes of Magda Szubanski, Courtney Act and even Dannii Minogue showing support for the campaign on social media.

There were, of course, a few times when I could’ve done better, and times when I made mistakes – I’m only human, after all.
Despite this, I will always be proud of the stories that were published under my leadership.

I had the privilege of witnessing from the sidelines some historic moments for our community, while meeting and befriending some wonderful people along the way. It was a job I never took for granted, and a chapter in my career that I will always cherish. 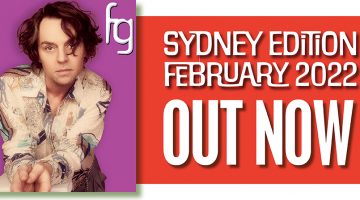