Both My Children Are Trans, Says Victorian MP “Both our children are trans and both are perfect,” Meddick of the Animal Justice Party, who was elected in 2018 to the Victorian Legislative Council, posted on social media.

Our eldest Kielan has been on a unique and personal journey that (with permission of course) I'm now proud to share with you all.

I’d like to announce the arrival of my daughter Kielan, aged 25 years.

Both of our children are trans, and both are perfect. pic.twitter.com/WLvb9dhtgf

“A lot has been going on lately — lockdown, Parliamentary inquiries, fighting the never-ending battles that the animals we share our planet with endure on a daily basis.

“During all of this, and indeed for years, our eldest Kielan has been on a journey. One that is unique and personal, and one that (with permission of course) I’m now proud to share with you all,” said Meddick.

“Just like our youngest (Eden), Kielan has been searching for understanding of who they truly are. And so now I’m pleased to announce the arrival of my daughter Kielan, aged 25 years. Your Mum, brother and I are proud of you, we love you. And no I’m not paying your phone bill,” added Meddick.

Advertisement
The posts on social media soon received hundreds of likes, with fellow MPs and his constituents congratulating Meddick.

“Congratulations Andy. A great role model for your children. Best wishes to Kielan for the future,” said Ben Caroll, Victorian Minister for Public Transport. “You are such a great dad. You and Kielan are so lucky to have each other,” said Steve Dimopoulos, Labor MP and Parliamentary Secretary to the Premier.

One of the first politicians to be elected on an animal protection platform, Meddick has been a strong supporter of LGBTQI rights. However, when his youngest child Eden came out as transgender, Meddick admitted that he had been “completely unprepared.”

He, however, soon became a vocal advocate for equal rights with the lived experience as the parent of a transgender child. Meddick’s was one of the important votes in 2019 in the state’s legislative council, that helped Victoria to pass the landmark law to allow Victorians to change the gender on their birth certificates without having to undergo surgery.

Advertisement
“Look into your hearts, feel their pain,” Meddick had said in the legislative council in a moving speech urging his colleagues to vote in favour of the reforms to the birth certificate gender change law.

“Doing all you can, as a parent (of a transgender child) isn’t anywhere near enough, when the law isn’t on your side or their side,” Meddick had said in August 2019.

“They are a part of your family, and your community. And they deserve the right to stand proudly as who they are, like everyone else. With a legal document that allows them to get a driver’s license or open a bank account or for them to obtain a passport and travel is who they are. We can never move forward with acceptance for trans people unless they can be legally recognised as their true selves. I want each and every child, adult, parent going through this to know, you are not alone. We must lift up and support young transgender people, because the rate of self harm and suicide among them is the highest in our community. And it’s all because of the arguments of hate and hysteria, of closed mindedness, of values that are no longer relevant to our modern world.”

The law that Meddick helped pass came into force in Victoria in May 2020. 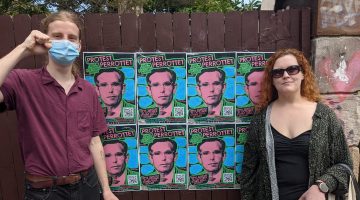