Ireland’s Ryan Dolan opens up about Eurovision, coming out and marriage equality 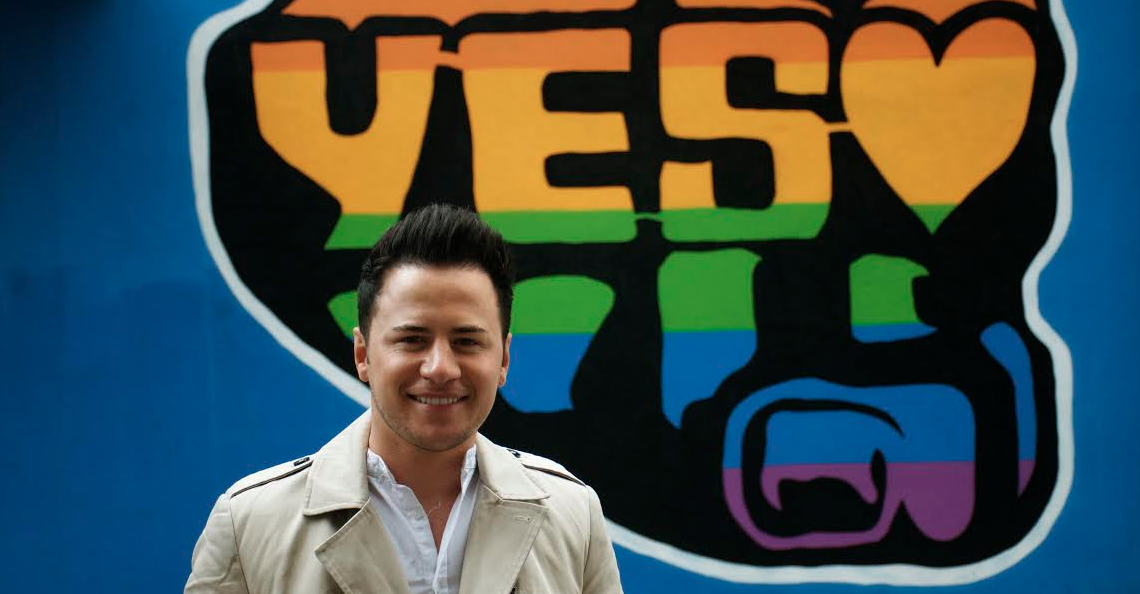 Ryan Dolan poses for the camera in front of a "Yes" poster in Ireland, ahead of the May 22 referendum for marriage equality. (PHOTO: David Alexander; Star Observer)

RYAN Dolan’s journey to and during Eurovision 2013 came after sudden exposure to the music industry following an unlikely start that even had his family surprised.

Coming from his father’s homeland of Northern Ireland to his mother’s native Ireland, Dolan was exposed to his share of tensions in the historically volatile region.

Advertisement
Although things have improved over time, Dolan said he still had to be aware of what he said after he was selected to represent Ireland in the 2013 Eurovision Song Contest.

“I supposed I tried when I was doing interviews I tried to keep both sides happy just with certain things,” he said.

“You just have to watch what you say occasionally. I mean, I’ve got Protestant fans and Catholic fans and there can be a few areas to be careful.

“Overall though it’s really fine, it’s very overblown and I got the feeling that people all around Ireland were behind me.”

Despite coming from a musically-inclined family, his talents were not discovered until his early 20s when he was asked to fill in supporting his sister in a competition after a backup singer pulled out.

Oddly enough, it was the first time anyone in his family had actually heard him sing.

“My family has always been into music. My father was in a band when he was younger and my mother sung mostly for fun,” Dolan said.

“My siblings sung as well but I was really shy growing up so I never really got into it.

“It was the fist time anyone in my family had heard me sing and they were really shocked. After that I started doing covers and things on video and posted them to YouTube and I started to get known a bit. Only Loves Survives was the third song I had written and Eurovision happened really quickly from there.”

Coming from Ireland, Eurovision is a part of the national narrative and Dolan’s exposure to the competition came via sitting around the TV with his family. However, this enthusiasm changed after one of the contest’s most controversial entries.

“When I was younger and Ireland was doing really well during the 90s my family was really into it but then I think after a few years and especially after Dustin the Turkey, Ireland just lost all respect for the competition and I think Europe lost all respect for us,” Dolan said.

“It never crossed my mind to do Eurovision, it was just something that came along luckily. It was brilliant and absolutely different to anything I had done before obviously. The two weeks leading up to the final are crazy and fun, I really enjoyed every moment of it.”

Dolan publicly came out as gay following his Eurovision stint via his single Start Again, but those closest to him had been aware of his sexuality for a few years.

Although he comes from a fairly open-minded family, telling his father made Dolan a bit anxious.

“I always had the fear that my father would have taken it really badly and some of my brothers who were real lads,” he said.

“I was 26/27 when I eventually told my father… and it went really well. He took it better than I had expected but he had absolutely no notion at all about me being gay.

“It just took a lot of courage to do and I guess I kept it secret for so long it just continued to bottle up and get worse in my mind. I had this thing in my head that he would go crazy and throw me out of the house or something, but he was amazing about it.

While he may have copped criticism for coming out after his Eurovision stint, Dolan does not have any guilt about it.

“I lot of people asked me why I didn’t come out before Eurovision since it’s got such a huge gay following and that it may have helped,” he said.

“I didn’t want that though. To come out just for and because of Eurovision, you know, like ‘oh, vote for me I’m gay’.

“I came out after Eurovision around the same time I released my single Start Again which is what the song is about, really: accepting yourself.

“I had a lot of female fans and I felt a bit guilty about not being completely honest with them,” Dolan added.

“I never really tried to hide [my sexuality] in terms of my career but I also didn’t see the need to come out publicly but then I suppose I had those female fans writing to me and you start to think, ‘am I actually hiding something?’

“So, I just thought a song would be the perfect opportunity to tell everyone in my own words.”

Despite what could be described as a fairly flamboyant-enough performance at Eurovision, complete with topless male drummers in leather pants, Dolan revealed that he had no input into the act.

“It was actually my mentor’s [idea] but also to be honest I was kind of against it at the time. I thought it was over the top… and gimmicky with the Irish drums and such,” he said.

“Since I was so fresh to it all and new I didn’t think there was a place for me to say anything and be really against it.

“I was sort of just playing along to keep everybody happy. I’ve made peace with it all and it was a great experience but I’m focusing on what I’m doing now which I’m really proud of.”

It was unsurprising that Dolan’s performance garnered the attention of Eurovision’s gay fanbase, a presence that has existed for a long time but has recently become far more visible.

“I always thought it was because it was just a big show with camp fun and music, but I think it’s become more than that now where the gay community has a sort of ownership over the contest,” Dolan said.

“Every sort of community or group needs something to come together over and along with things like pride events, Eurovision has really become something that connects many of us.

“It’s very important that the gay fans and performers in Eurovision continue being more open and visible because visibility is the key to raising awareness of issues that still exist around Europe. Anything that brings us together is a good thing.”

Not having such opportunities for the LGBTI community to be able to unite became clear during a trip to Russia, where Dolan performed at — amongst other places — a gay club.

“It’s really surprising the size of the gay community there, it’s just all obviously underground,” he said.

“[One half of Russian band] t.A.T.u performed at the same club as I did. It was a really good club surprisingly and I thought to myself, ‘this is Russia. How is this possible?’

“It was also quite scary, too, because you hear the stories of police raids or those gangs that essentially hunt gay people.”

With the latest polls indicating a successful result for Ireland’s referendum on marriage equality this week, Dolan hopes that such polls can translate to genuine “yes” votes and that the same eventually happens in Australia.

“I think we’re going to get the ‘yes’ vote, fingers crossed. If you drive around Dublin at the moment there are a lot of ‘no’ campaign posters but there are also plenty of supportive placards,” he said.

“The overwhelming public view I think will help pass [the referendum] with about 70 per cent for it.

“I suppose the actual vote may come down to a closer result because there are a lot of people in polls who just say they’re going to vote yes and are actually going to vote the other way.

“The people that are going to vote yes are the kind that are really open about it but then others who vote no are typically quiet about it. It’s just hard to predict but I think it will pass, thankfully.

“If someone had asked me I would have said I thought Australia would have [marriage equality] but it comes as a real surprise that you guys don’t.”

Writing and producing the majority of his own work, touring and making the occasional appearance at European pride events make up most of Dolan’s post-Eurovision career.

“I’m just working on my first real album at the moment. My first one after Eurovision I really regretted because it was just full of songs I didn’t write,” he said.

“The record company already had an idea of an album they wanted released after the competition regardless of the result. Unfortunately, it was just rushed and wasn’t personal at all.

“I want to get this album 100 per cent right and be completely happy with it and with no regrets.”

Dolan also suggested a trip to Australia could be on the cards, too.

“I would absolutely love to go there,” he said.

Previous post WHAT'S ON: Out for Australia's Queensland launch