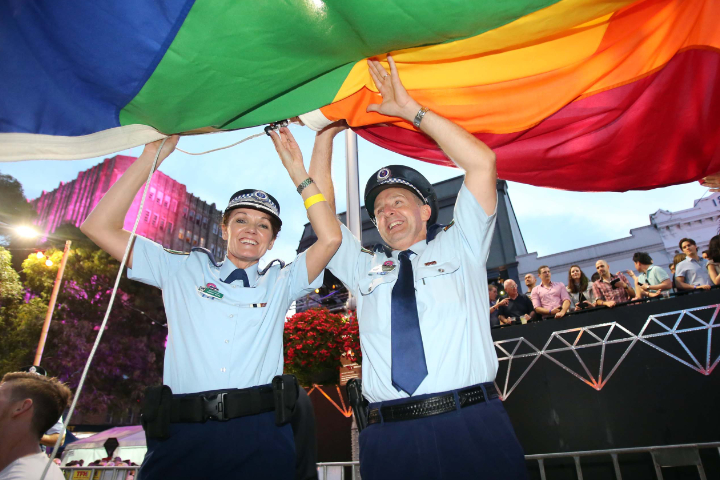 A raft of measures were voted down by the Mardi Gras membership at this year’s AGM including a controversial motion that would have banned police from participating in the Mardi Gras Parade.
Among the other measures that were uniformly voted down by Mardi Gras members were motions to ban corporate sponsors including ANZ, the Star Casino and QANTAS. Another motion to ban Scott Morrison and Gladys Berejiklian from involvement in Mardi Gras was also rejected.
Proposals from the board to change the rules so that protest groups would find it hard to sign up new members and gather proxies failed to attract the votes required to be adopted.
This year’s AGM was held online due to COVID-19, with a digital format that, according to participants, was confusing to some. The decision to mute the chat function during the online meeting was also criticised by other members as anti-democratic.
An announcement will be made in the coming days regarding new board positions.

On October 21 an open letter addressed to Sydney Gay and Lesbian Mardi Gras was published by activist group Pride In Protest. The letter asked for the removal of police and corrective services from any future Mardi Gras Parades in solidarity with the Black Lives Matter movement, and has been signed by over one-thousand people including artists who have been involved in Mardi Gras such as Nayuka Gorrie, Sally Rugg, Tom Ballard and Montaigne.

Advertisement
Ahead of the vote, Mardi Gras stated, “it is our view that excluding groups or individuals who are Lesbian, Gay, Bisexual, Transgender, Intersex and Queer or our allies (LGBTIQ+) from Sydney Gay and Lesbian Mardi Gras events based on their career, association, political affiliation or the banner they wish to march under does not align with our intrinsic, core value of inclusion.

“At the last two Mardi Gras AGMs the members voted to not ban the police from the parade, acknowledging that their active involvement in the march is a sign of reconciliation and progress, and for that reason Mardi Gras will continue to welcome their involvement.

“When considering the motions, as with all decisions, the board will be holistically guided by the objectives expressed in Sydney Gay and Lesbian Mardi Gras’ Constitution and the values outlined in our Strategic Plan.”

Prior to the AGM, Star Observer also spoke with Keith Quayle, a representative of Pride In Protest who proposed the matter at the AGM. Quayle stated that “I really do believe in the future that we can bring Mardi Gras back to what it originally stood for, for all members of our community.” Quayle subsequently stated that “I think it’s imperative to keep the history and activism going within Mardi Gras.”

Quayle also stated that “I would like to add a section after 2.1 (of the Sydney Gay and Lesbian Mardi Gras Constitution) that there are no uniforms allowed in the parade.”

“To the LGBTQI community, I’m sorry for our mistakes in the past. We acknowledge the pain and hurt caused by the actions of government agencies driven by the indifference of society.

“But with my personal vow never to take a backwards step, the NSW Police Force has worked extremely hard to mend this relationship over the last few decades.

“I can make you a promise we won’t take a backwards step, that I would much rather step forward in a partnership,” Fuller’s apology stated.

QNews has also reported that, in regards to the current topic of debate around the inclusion of police and corrective services in Mardi Gras, a spokesperson from the NSW Police has stated that the force “acknowledges our history and therefore the importance of working closely with the community and in participating” in Mardi Gras.

Next post Dungeons And Drag Queers Bring Representation To Gaming