WORRYING curriculum holes on LGBTI health for medical students have left it up to students to fill the gaps themselves with supplementary courses.

In response to concerns from students and advocacy groups about a lack of content relating to sex, sexuality, and gender identity in university medicine degrees, the Australian Medical Students’ Association (AMSA) has launched a series of online modules called “AMSA Academy”.

Advertisement
One of the most recent modules, called Let’s Talk About Sex, has a significant LGBTI component — the online courses offer students presentations, forums and even assessment.

Dr Ruth McNair from the University of Melbourne and the Australian Lesbian Medical Association provided significant input into the modules.

While she hoped the modules would increase pressure on universities to change content in the curriculum, she told the Star Observer it was becoming harder to include information on any subject in increasingly-crowded medical courses.

“It’s similar everywhere — there’s more and more content to include, and increasingly students are being asked to self-select topics and find their own information about even core information,” McNair said.

Even topics listed as “core” are not entirely delivered through tutorials and lectures, so medical students are encouraged more and more to seek out information independently. Although McNair said this kind of learning could be a good thing, when it comes to topics already marginalised — like the health of minority groups — it’s an issue.

She argued this leads to “self-selection” on the part of medical students, so those who seek information on LGBTI health are often already aware of issues. Worse, they risk being marginalised and stigmatised within student bodies.

“It’s certainly happened to some of the Australian Lesbian Medical Association people that I’ve met over the years, if they’re the lone voice in their cohort trying to say we need more training here they do risk the more conservative students stigmatising them vilifying them,” she said.

These kinds of criticisms are not new—while Indigenous health is part of core medical curricula now, the inclusion is the result of decades of constant lobbying.

AMSA’s Asiel Adan has spearheaded the inclusion of LGBTI content in the modules, and told the Star Observer it was about much more than just increasing strictly medical knowledge. The sexual health module was developed in extensive consultation with LGBTI organisations, including Organisation Intersex International Australia and the Zoe Belle Gender Centre.

“The [module] includes an extensive section on LGBTI sexual health, focusing particularly on principles of communication and inclusive practice,” he explained.

Last year Adan founded an LGBTI medical students group at the University of Melbourne, and has been pushing for the inclusion of more LGBTI content in medical curricula for some time.

Transgender Victoria was one of a number of organisations who contributed to the LGBTI components of AMSA’s training modules, and executive director Sally Goldner told the Star Observer a general lack of understanding on trans* issues in the medical community was a huge issue.

She described situations where trans* people would go to a GP for something as simple as a sprained ankle and end up having to spend 10 minutes explaining trans* issues to the doctor.

Goldner argued increasing that education when people were still in university could only be a good thing: “If it was told right from the start that there are different bodies, people would then consider that holistically on every level.”

McNair agreed, and said if LGBTI topics were included in the core medical curriculum it would provide an excellent opportunity to change attitudes in the medical community.

“This is a time when we can influence the students best, I think, because they’re still pretty open-minded, they’re generally very non-judgemental people who want to do their best,” she said.

“If you have core curriculum around LGBT, they sit up and take notice…and then they influence their peers and senior colleagues once they get into the workforce.” 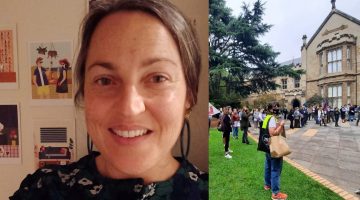