One major highlight of the festival will be Gay for Page, hosted by Sally Rugg, which will explore which queer texts helped shape Greer, Chee, Legler, Rosenberg, Throsby, Korneliussen and Washington as writers.

Rosenberg will also front a session to discuss his book Confessions of the Fox, while Legler will discuss her memoir Godspeed, looking at her experiences as a former Olympic swimmer who became the first woman awarded a male modelling contract.

Marr will appear to discuss his recent essay collection My Country.

Roupenian, author of the viral New Yorker short story ‘Cat Person’, will discuss her debut collection You Know You Want This with Estelle Tang, while Chee will discuss his essay collection How to Write an Autobiographical Novel and also appear at Notes on a Crisis: The Literature of Love, HIV and AIDS alongside The Great Believers author Rebecca Makkai.

Lie to Me: An Evening of Storytelling and Song will bring together Law, Gorrie, Patricia Cornelius, Tim Soutphommasane and more to explore the fictions that underpin our daily lives and the changing value of facts in a post-truth era, alongside musical guest Megan Washington.

Greenlandic author Korneliussen will discuss her debut novel Crimson, which tells the story of four queer characters coming to terms with their identities in the country’s isolated capital Nuuk.

This year’s festival centres on the theme ‘Lie to Me’, which Artistic Director Michaela McGuire says will “explore the ways that writing can be used to deceive others in an increasingly post-truth world and look at the lies that we tell ourselves and each other, and those we collectively tell as a country.”

Sydney Writers’ Festival runs from April 29 to May 5. You can view the full program at swf.org.au. 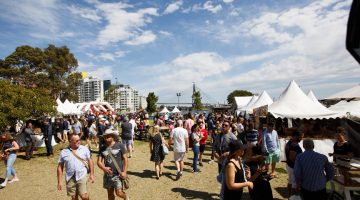