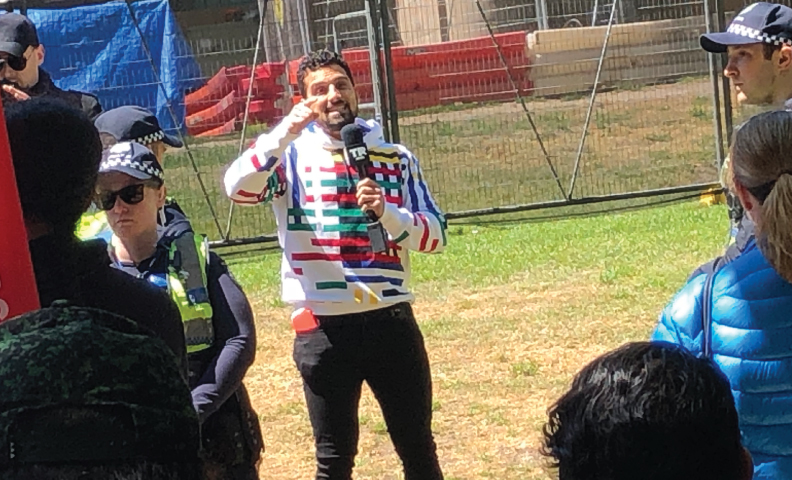 This weekend in Melbourne activists, families, students and community members rallied together to protest the draft Religious Freedom Bill at the Victorian State Library.

Gathering next to flowers laid in memory of Mhelody Polan Bruno, a transgender woman who was killed in Wagga Wagga, attendees heard from a range of speakers including Safe Schools co-founde Roz Ward, activist Sally Rugg and Federal Member for Melbourne Adam Bandt.

“When this government tells you that this Bill is about protecting religious freedoms, do not believe them for a second,” said Bandt.

“This Bill is about legalising conduct and speech that at the moment is hateful and illegal and it’s payback from the people who feel that they lost out when marriage equality became law.

“This Bill changes the law in ways that entrenches and legalises discrimination. It will give people rights and protections that are hateful. It will tell teachers that no matter how well they do their job, that they always will have the threat of firing hanging over them because of who they are and that is not right.

“It is a trojan horse of hate and it needs to be sent back to the drawing board and if you are not going to rewrite it then don’t pass it,” he told the crowd. As a queer teacher stepped forward to speak up about the experiences LGBTI teachers in schools currently face in Victoria, the rally was halted by the arrival of far right activist Avi Yemini with a camera man.

Police created a barrier between Yemini and the rally, as people called for him to leave the space. The rally continued with Yemini behind a police line as a member of the LGBTQI community spoke about their concerns should the Bill be passed.

“I’m a queer person of faith and my message today is a simple one, we need to kill the Bills,” Roe from Rainbow Rebellion said.

“The one thing about being a person of faith in this country, is my freedom to practise, believe and observe that faith has never been in question.

“However, as a queer person of faith, my freedom to practise this faith has been put in jeopardy and has been impacted. It was not the general or queer community who impacted it, but the religious community.” “Queer people of faith are unable to walk into their place of worship without fear for their safety, and these Bills will make this worse. These Bills are not about religious freedom, they are about religious privilege.”

The rally continued as Yemini stood behind and continued filming.

It concluded with an open mic where anyone was welcome to share their thoughts or feelings. Young people and those marginalised in our communities stepped forward and spoke of their fears, history with discrimination, and how proud they were to see a community standing together.

Last week, members of our communities travelled to Canberra to meet with as many politicians as they could to share their concerns for the proposed Bill, while Federal Opposition Leader Anthony Albanese met with faith leaders.