Wooden was best known for his iconic drag persona, Mona Foot, as well as through his band ‘The Ones’ who scored a major chart hit in Australia with 2001 club anthem Flawless.

Wooden was just 50 years old when he died.

Project Runway designer and close friend of Wooden, Geoffrey Mac, confirmed in a video on Instagram that the Coronavirus now sweeping the world was the apparent cause of Wooden’s death.

“I just want to make sure that everyone out there is healthy and takes care of each other,” Mac said with tears.

“The virus is really real and I’m just so sorry.”

While Wooden’s diagnosis has not been officially confirmed, reports surfaced that he was allegedly turned away from hospital after presenting with symptoms of Coronavirus.

Wooden rose to fame in the pre-Drag Race New York City club scene of the early ’90s, earning a reputation for squeezing his muscular physique into tiny dresses, as well as his Aretha Franklin lip syncs.

He also mastered makeup from none other than RuPaul while he was doing an off-Broadway show called My Pet Homo.

Wooden also claimed the title of a New York night time staple with his performance of “I’m Every Woman” at Union Square Park while he was dressed as Wonder Woman.

In a 2017 interview with Paper, Wooden touched upon his famous Wonder Woman show and noted the significance he felt towards what the performance represented.

“I really became intoxicated once I did Wonder Woman at Union Square Park,” he said.

“I could see the power of it. No one saw that coming. To be not only a superhero, to be Black and a man. I didn’t realize at the time I was feminine.

“The message was so powerful, performing ‘I’m Every Woman’ as Wonder Woman.”

In the late ’90s, Wooden then became a singer in the dance-pop trio ‘The Ones, as well as appearing alongside Robert De Niro in the movie Flawless.

“In 2019 she is who announced that I had won Entertainer of the year – to me the honor was being on the same stage as such an icon. 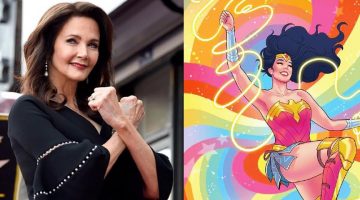