The couple embrace at the aGenda fashion show after the proposal. Picture: Ann-Marie Calilhanna

The couple have known each other for a year and a half. Cass says “sparks were undeniable”. The fashion show featured clothing designed by Cass and Hannah, who met about a year and a half ago. The sparks were undeniable when they met, Cass says.

“I proposed at Mardi Gras for two reasons,” Hannah reveals to Star Observer.

“Firstly, I wanted it to be something she’d never forget and for it to be a huge surprise. Doing things by halves has never been my style.

“I also chose the fashion show because it was something we’d worked on together around the clock for months. The clothes really are our babies. So it was a really meaningful day for us already, and it was the perfect chance.”

“The crowd loved it,” Hannah says. “It was quite overwhelming how much love and support we received.”

“I couldn’t be more blessed or grateful,” Cass adds “I’d marry her yesterday.”

Hannah and Cass are the brains behind Androswag, a new fashion label that specialises in androgynous clothing for tomboys, trans and queer folks. For Mardi Gras, the pair is donating $5 from every item sold to the Aurora Group.

Maskateers – Joining The Fight Against COVID-19 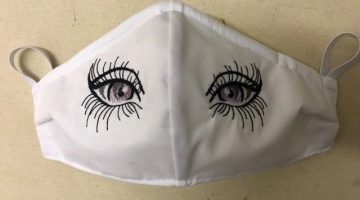