As the managing director of SBS, Michael Ebeid is without doubt one of Australia's most powerful media figures. He sat down with Elias Jahshan to discuss how being openly-gay in the workplace from early on set the foundations of his successful career, and how he navigates his sexuality alongside his Egyptian cultural background.

HE may be one of Australia’s most prominent chief executives today, but Michael Ebeid still remembers a time when the odds seemed to be against him.

“When I was in my early 20s, I don’t recall ever knowing or hearing about an openly-gay CEO,” he said.

[showads ad=MREC]“When I told people I was gay, they used to say, ‘well, you know you probably won’t go far in your career’.

“It was quite upsetting in a way.”

It was during his third year at IBM in the late 1980s that Ebeid first came out in the workplace. After working his way up the corporate ladder, he eventually took up senior positions with Optus and ABC before being appointed managing director of SBS in 2011. He partly credits his successful career to that moment when he first came out.

“It was so much easier at work after that,” Ebeid told the Star Observer.

“I was constantly lying, and that really used to upset me because you’d turn up to work on a Monday morning and you’d be creating all these stories about who you went out with… I think that’s when I realised you just can’t go on like that.

“When I changed from IBM to Optus (in the mid-90s) I made the decision that I would be out and comfortable from day one and that made a big difference as well.

“Just being able to be yourself means you can then focus on what really matters in life and put all your energies into your ideas, your thoughts, your initiatives at work, and not waste time and energy worrying about what other people think [and] whether you’ll feel included or excluded in social settings and work environments.”

Today, Ebeid is at a peak in his career. Since taking over the helm at SBS, he has expanded its radio arm to 74 languages, launching SBS On Demand, and launched NITV — the first national TV channel catered to and produced by Indigenous Australians. The profile of Eurovision has also skyrocketed under Ebeid’s tenure, and he was pivotal in returning the Sydney Gay and Lesbian Mardi Gras Parade to free-to-air TV for the first time in 12 years.

“One of the things that I’m really proud of is that we did’t just show the celebratory glitz and glam and sequins of Mardi Gras,” he said.

“That’s what makes up the entire broader gay community and I wanted to showcase that in a really positive light to broader Australia.” 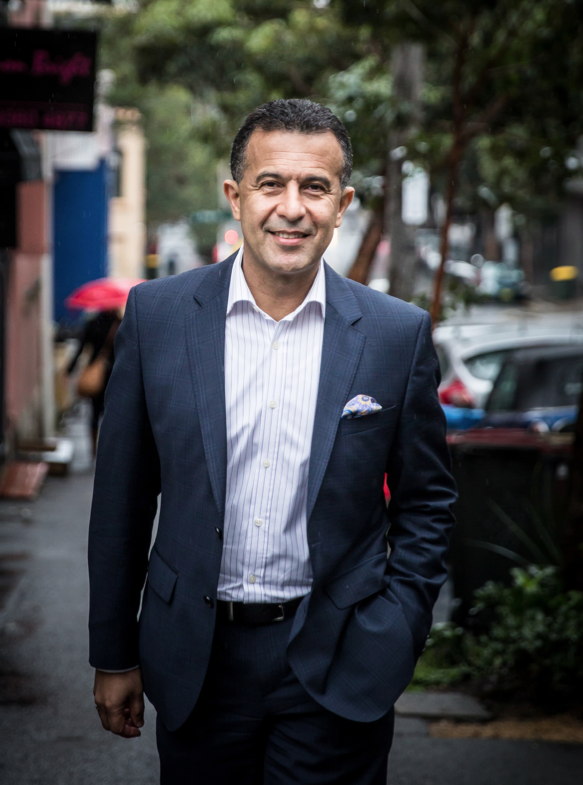 Last year, the Sydney Morning Herald listed Ebeid as one of Australia’s 75 most powerful people on TV.

“I’m really proud of what SBS has been able to do in the last four years,” Ebeid said.

“The organisation’s gone from being a small, sleepy public broadcaster to a bit of an edgy, fun broadcaster that’s really doing stuff about inspiring people to think about the world differently.”

“It’s important that there are lots of senior positions in corporate Australia that people can aspire to,” he said. “There used to be a joke years ago when I was in my 20s that all gay guys were either hairdressers, worked in retail or had unskilled roles, which is just nonsense, complete nonsense.

“Now you’ve got loads of very senior CEOs running major Australian brands — really big brands like Qantas, SBS — who are all out and proud and also supporting marriage equality because they know that it does affect people at work.”

The topic of marriage equality was a personal one for Ebeid, who has been with his partner Roland for 11 years.

“I would hope that we could get married someday,” he said.

“We’ve talked about it, about going overseas and doing it. But we decided not to do that and that there’d be no point because when you come back home, it’s not recognised.

“So we want to wait for the law to change here and I’m very hopeful that our parliament will do it eventually.”

While coming out at work seemed to be smooth, back home, it was a bit of a challenge.

The son of Egyptian immigrants, Ebeid said his cultural background held him back until he was about 36. In addition, there was a time in his early 20s when he was engaged to be married to a girl.

“I thought I was doing the right thing by my family and parents and all that sort of stuff and then realised that [I was] not,” he said.

“Having those three things working against you is always hard, but once I did tell them, it was an incredible weight off my shoulders.” In Arabic-speaking cultures, Ebeid said there was a prevalent stigma around homosexuality — regardless if they were Christian or Muslim.

“For some families, all they know is that in their country it’s either punishable by death or you get imprisoned,” he said.

“There’s certainly a massive gay Arabic community in Australia, both boys and girls… But the sad reality is that some families just won’t accept it and some will always have an issue with it.

“Family is kind of everything. You’re constantly surrounded by them and the whole family unit is reinforced as a very important thing in your life. To lose that is a big fear.”

While Ebeid said he was a “big believer in being true to yourself”, he acknowledged that everyone’s coming out journey was unique — no matter what cultural background they come from.

“With every generation it’s becoming easier (but) you’ve got to be ready at your own time, and to know you’ve got support around you as well is really important,” he said.

Ebeid said his parents experienced the “usual sad stage of feeling bad about not having grandkids”, but they eventually came around. He also has a good relationship with his older brother and four nephews. However, he admits that some in his extended family still struggle with it and don’t talk about it.

“But people who are close to me who matter are incredibly supportive,” he said.

His parents’ relationship with Roland is testament to this.

“I’m really fortunate that my mum now, being the good ethnic woman that she is, is all about food and cooking,” Ebeid joked.

“If my partner doesn’t go round to her house on a weekend, she’ll make sure she sends me off with a doggy-bag for him with all his favourite dishes.

“That’s when you know that your parents are supportive — when your mum cooks for your boyfriend or partner, that’s kind of pretty cool.”