A 28-year-old restaurant worker who planned to carry out a terror attack at the London Pride Parade was sentenced to 25 years imprisonment on Thursday.

A Woolwich Crown Court had in February held Mohiussunnath Chowdhury guilty of various offences under the Terrorism Act of 2006. He was charged with trying to attend a firearms training school, sharing a graphic Daesh execution video, being in possession of a replica handgun, two Japanese wooden swords and a knife attack terror manual.

Chowdhury had confided and discussed his plans with his sister Sneha (25) who was convicted for not informing the police about her brother’s terror plot. Sneha will be sentenced at a later date, said the Crown Prosecution Service.

“Mohiussunnath Chowdhury is a serious danger to the public and it is right that this successful prosecution means he will serve a lengthy prison sentence,” said Jenny Hopkins, head of the Special Crime and Counter Terrorism Division in the CPS, in a press statement.

Advertisement
“Inspired by previous murderous attacks and his warped ideology, Chowdhury wanted to cause indiscriminate death and mayhem on the streets of London using a firearm, a sword and even a van.

“Despite knowing that Chowdhury expected to die in any attack, his sister decided not to tell the police about the plot. Even when it involves family, we all have an obligation under the law to report any risk of terrorism to keep our country safe. The hard work of our prosecution team has resulted in a dangerous terrorist being taken off the streets,” said Hopkins.

Chowdhury and his sister were arrested in July 2019, days before the London Pride Parade. The prosecution said that Chowdhury was allegedly inspired by al-Qaeda and the 2017 Westminster terrorist Khalid Masood, who had killed six people and injured 50 others outside the Palace of Westminster in London.

“He discussed various targets with those he thought shared his violent outlook. These included the Pride parade in London and his goal was to cause indiscriminate slaughter using weapons he had set out to acquire,” the prosecution said during the trial. His other targets were Madame Tussauds and tourists on a London open-top tour bus.

Advertisement
The Chowdhury siblings were arrested following an undercover operation launched by the police after his acquittal in another terror related case in 2018.

In August 2017, Chowdhury drove to Buckingham palace, took out a Samurai style sword and started shouting “Allahu Akbar.” He was restrained by the Palace guards who suffered minor injuries. Chowdhury was arrested and prosecuted on terror charges. His lawyer successfully argued that Chowdhury’s intention was not to hurt anyone but get killed by the police. The jury in December 2018 were convinced by this argument and acquitted him.

Weeks after his release, police put him under surveillance after finding that he was posting incendiary messages on his social media and had purchased an imitation Glock pistol. An undercover operation was launched with police officers posing as persons interested in carrying out similar attacks. His house was bugged which led to recording of conversations with his sister.

According to the prosecution, Chowdhury used his sister’s bank account to buy 40 inch Samurai-style wooden swords, which were used by the siblings to practise at their home in Luton.

“You attack first and then I attack first… This is how, how I would strike yeah if I was running up to a person… what I would do is I run up hold the blade like that and then I would stab it like that,” Chowdhury was heard telling his sister in the recordings made available to the jury. On June 20, Chowdhury told his sister about his intention to quit work. “I’m doing another attack bruv…” His sister responded that he was just feeling down. He replied, “No I’m serious bro it’s about time now.”

The BBC reported thatChowdhury had discussed with an undercover officer as to why the Pride parade was a target: “piss-poor security… the way they march they are asking to get hit by some jihadist.” 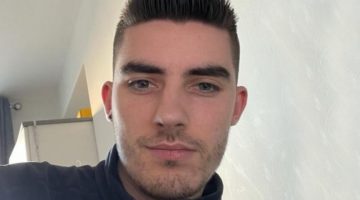